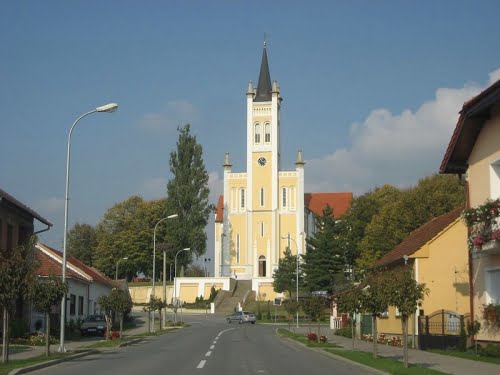 The name Molve comes from the mills on the Drava River and its tributaries. Although it can be unofficially heard that Molve existed in the 13th century, they are reliably mentioned in 1330.

According to a document from 1366, Molve were the centre of a little feudal possession of the same name, which in 1397 King Žigmund gave to the sons of Ivan of Kanizsa. In the 15th century, they became part of the Koprivnica-Đurđevac-Prodavić estate.

From the medieval chapel, a wooden Gothic statue of Mother of God was preserved, dating back to 1470. The miraculous power of the statue from Molve turned Molve into a Marian sanctuary and the centre of pilgrimage to believers. The village and the chapel were destroyed by the Ottomans, and the population ran from the village before them. During the demographic reconstruction of Podravina, in the mid-17th century, Molve were reconstructed, and the village was reinhabited by the residents from neighbouring settlements and from Zagorje and Međimurje.

The parish was founded in 1665, and the parish church was built from 1855 to 1863. It is one of the largest and most representative churches in Croatia from the 19th century. Most of the inventory of the church was created at the end of the 19th and early 20th centuries for the parish priest Blaž Tomašić. The main altar, commissioned in Tyrol and built in the workshops of the famous sculptor Ferdinand Stufler (St. Ulrich, 1855 – Ortisei / St.Ulrich, 1926), was delivered to Molve in 1897 together with four large statues of St. Lucija, St. Barbara, St. Rok and St. Florijan.

After the demilitarization of the regiment of Đurđevac in 1871, Molve became the centre of the municipality. In 1974, a natural gas site was found, one of the most important in Croatia, and in 1978 its exploitation began. Molve are one of the centres of Croatian naive art, with a gallery founded in 1994.