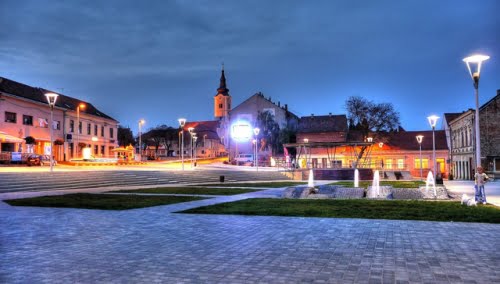 Križevci are the second largest town in Koprivnica-Križevci County. They are famous for its rich and glorious past. In Križevci, from 1860, the first Economic and Forestry School in this part of Europe has been operating, and its tradition is continued by the Agricultural High School and the College of Agriculture in Križevci. Križevci are a town of sports: athletics, football, basketball, handball, taekwondo and motorcycling, and city schools: four elementary, four middle and two high schools. For more than half a century, the town has a public swimming pool with two outdoor swimming pools.

The town of Križevci is known for “Križevački štatuti”, unique written rules of behavior in cheerful company with various winery ceremonies. There is also a well-known traditional tourist event “Križevačko Veliko Spravišče”, which takes place in June, and serves as a reminder of the reconciliation of the Kalnik nobles and Križevci commoners.

Križevci are the initiator and host of the County Craft and Trades Fair open to foreign exhibitors. The town has several industrial and service areas for the development of small and medium entrepreneurship. This region is also known for other activities and for its agricultural products: meat, milk, wine, corn, fruit, and honey.

Near Križevci, in the village of Apatovec in 1842 a source of mineral water was discovered, where in the fall of 2004 the most modern Croatian plant for bottling mineral and spring water was built. With its intact nature and rich forests of the hilly countryside at the foot of the mountain Kalnik, Križevci provides a great opportunity for the development of all forms of tourism (excursions, farming, hunting, etc.) and the preparation of athletes.

Križevci are a bishopric city, the seat of the Greek Catholic Diocese. Križevci are also the birthplace of St. Mark of Križevci, the third proclaimed saint of Croatia.