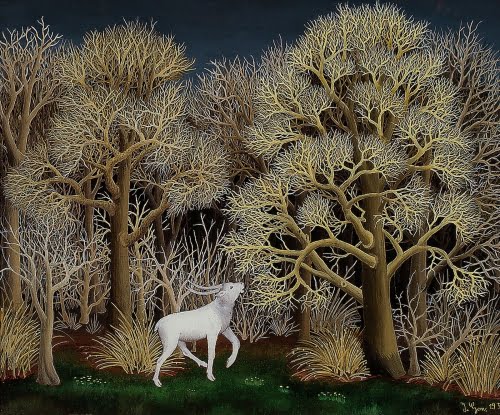 The Hlebine school is the name of the cultural-tourist event programme in the most famous village of naive art – Hlebine. The project was conceived and is carried out by the Pastorala d.o.o. agency from Koprivnica, which holds artistic meetings, workshops, art colonies, naive art fair and naive art courses.

The event was named after the artistic movement initiated by the painter Krsto Hegedušić in the early 1930s. Staying multiple times in the native village of his parents, he saw the works of two local boys, Ivan Generalić and Franjo Mraz, and thematically focused them on painting social motifs, introducing them in the time and work of the famous artist group called “Earth”. As this group in their program had the intention of spreading art to all societal groups, the case of two farmer-painters confirmed their hypothesis that artistic talent is not reserved for the privileged.

Over the years the movement spread, first with the introduction of the third great name, Mirko Virius, and then, after World War II with the works of Franjo Filipović, Dragan Gaži, Josip Generalić, Mijo Kovačić, Ivan Večenaj and Martin Mehkek.

Today, Hlebine School of painting and sculpture includes more than two hundred names, from the oldest to the youngest generation and, apart from Hlebine, has significant and numerous representatives in villages Molve, Gola and Gornja Rijeka and in the towns of Koprivnica and Đurđevac, therefore, on a narrow area of ​​the Central Podravina, thirty kilometres in diametre.

Naive painting of Podravina is characterised by motifs from the everyday rural life, the calm landscapes, and live, “local” colours, especially the unique painting on glass. The motif, the color, and the technique are so typical that the image of Hlebine school is equally recognised by experts and laics, both critics and ordinary lovers.