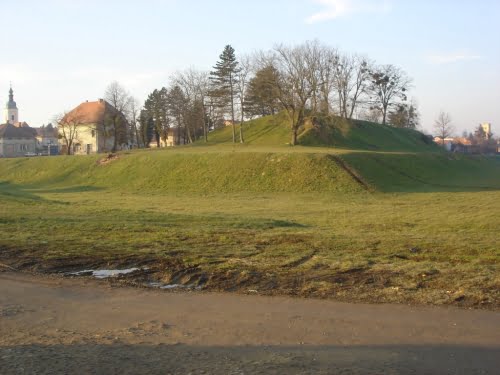 Despite its turbulent history, Koprivnica is a town that has preserved a significant part of its cultural and historical heritage. The town and its landmarks increasingly attract tourists and visitors, and the entire historic town core is actually a unique monument.

Inside the former military fortress, there are very valuable architectural monuments mainly located in Đuro Ester Street and on Dr. L. Brozović Square. There is the parish church of St. Nicholas, probably constructed on the foundations of a medieval Franciscan church. It was built in its today’s form before 1657 and thoroughly redecorated in 1892. The inventory inside the church belongs to a contemporary period. On the outer wall, there are memorials to three notable men from Koprivnica. In the middle of the 18th century, the baroque parish house was built by the church (its present-day appearance is mostly from 1779). A rare renaissance stela (gravestone) was erected on the park-side wall in 1608.

The Franciscan monastery and the church of St. Anthony of Padua show a truly long history of Franciscans in Koprivnica (they arrived here around 1290). The Baroque monastery made of masonry, which leaned on the no longer existing earth fortifications, was built between 1675 and 1685 by the Franciscans. In the church of St. Anthony, there is some particularly important Baroque inventory and the later added Baroque chapel of St. Salvatore. Inside the former military fortress, there are also very valuable Baroque sacral pilasters, situated in the park on Dr. L. Brozović Square.

Of profane architecture, the old town hall is especially attractive (later, it became the court building, and today it is the Town Museum of Koprivnica). This one-floor baroque building was constructed after the large fire in 1736. Today, the Town Museum has several important collections of which the archaeological and ethnographic stand out. Between the museum and the Franciscan monastery, there is a ruined edifice of a valuable civil house with a distinctly decorated front. Across the street, there is the Malančec family civil house. It was built by architect Carnelutti at the turn of the 19th into the 20th century. Today, there is an attractive and a large collection of civil furniture and paraphernalia in the house, which falls under the Town Museum’s jurisdiction.

On the east side of Đuro Ester Street, near the church of St. Nicholas, there are several valuable houses and palaces from Baroque and Historicism. First of all, there is a Baroque town palace, probably built after 1765. Also, there is the Sulimanović Family house where a museum was founded, and on its entrance portal, there is an engraved coat of arms of Koprivnica. Other houses are of a newer date of construction – mostly palaces from Historicism and Secession, from the turn of the 19th and 20th centuries. There’s the old chemist’s house “K crnom orlu” (To the Black Eagle), and also the Secession Jelić Family house, etc. From the period of Historicism, there is also an interesting firehouse in Frankopanska Street (Pseudomoorish-gothic architectural style).

For visitors, the centre of the old town outside the former earth fortifications is the most interesting to see; today there are Zrinski, Jelačić, and Florijanski Squares. There is a connected block (mostly) of single-storey buildings, which were built in architectural styles from Baroque to Secession. There is a significant building of the new Town Hall which dominates the Zrinski Square. The foundation stone for this building was laid by Josip Jelačić in 1856, then until 1892 it was a public school, and today it is the Town Hall. In front of the Town Hall, there is a famous monument to the bicycle. Of the preserved Baroque buildings, the most prominent one is a one storey building on the corner of Zrinski and Jelačić Squares, then there are two buildings with a qanāt duct system on the first floor – these are the brewery (with open arcades on the ground floor, and the interior decorated by famous artists of Koprivnica), and the Villa Parva. Of Historicistic buildings (mainly from Carnelutti’s architectural workshop) the Koprivnica Savings Bank (Town Gallery) and the Fran Galović Library and Reading room stand out. There are also several important Historicistic buildings on Jelačić Square, of which the former Koprivnica Colleges of higher education building and the former Hotel Križ stand out. And on Florijanski Square, there are several one-storey and ground-floor buildings, mostly from the period of Historicism, constructed at the turn of the 19th and 20th centuries.

In Svilarska Street, next to Zrinski Square, there is the building of the Jewish synagogue. This place of worship was erected by a large Jewish community of Koprivnica in 1875 and it was restored by the famous architect Koprivnica Slavko Lövy in 1937. Along with the main town square, the former Koprivnica town park was decorated on the place of old moats and earth fortifications. Its origins date back to 1856, but in the design of the park at the end of the 19th century, most credit belongs to the town’s gardener Dragutin Ruhl. The wooden pavilion from 1896 is the work of the carpenter Antun Rogina, and in the park, there is the famous sculpture of Josip Fluksi called Buđenje (Awakening). The Koprivnica town park is one of the most beautiful in northern Croatia.

Of old buildings in Nemčićeva Street, you should take a look at a Baroque civil house (built before 1772), then the building of the sub-county of Koprivnica (Carnelutti’s work from the end of the 19th century), a Historicistic single-storey house (with the most beautiful Secession wrought-iron fence in the town), and a Biedermeier one-story building where the writer Antun Nemčić Gostovinski lived). Along with the Historicistic single-storey merchant houses, on the Square of Youth (where it used to be a livestock fair) there is the building of the old Koprivnica Gymnasium (from 1908), and Domoljub (the Hall is from 1919). Near the park in Nemčićeva Street, there is the Orthodox Church of the Holy Trinity (Baroque, from 1794).

Of the other old buildings, the old town hospital stands out (built mostly from 1873 to 1875), and next to it there is the chapel of St. Florian (which used to be at Florijanski Square and was rebuilt here in 1892). In Starčevićeva Street (near Podravka) there is the well-known Chapel of Our Lady of Sorrows of Grantule (1737), and the old slaughterhouse building in Starogradska Street – today the Podravka Nutrition Museum. Town cemeteries – especially the Catholic and the Jewish – abound with valuable monuments, too. Finally, in the western suburbs of the town, there is the pilgrimage church of the Blessed Virgin Mary in Močile, which was built in the 1700s.